“TIME FOR HARD CHOICES” REPORT LAUNCH: On September 6, 2019, the Dag Hammarskjöld Foundation and the Multi-Partner Trust Fund Office launched a report titled “Financing the UN Development System: Time For Hard Choices.” Split into two sections, part one provides UN funding data on revenue and expenditure, while part two delves into the financial complexities of the 2030 Agenda, told from the perspective of more than 30 authors within and outside the UN system. Read the full report here.

“WOMEN IN POWER” CALL TO ACTION 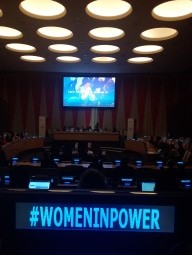 : H.E. Mrs. Maria Fernanda Espinosa Garcés, the 73rdPresident of the General Assembly, led the final informal high-level event in her “Women in Power” series. The call to action was titled “Voices for Change and Inclusion: Joining Forces and Redoubling Efforts to Achieve Gender Equality and Women’s Empowerment for All,” influenced by Espinosa Garcés’ eight priorities to advance female leadership. During opening remarks, Ms. Susan Malcorra stated, “We are deeply convinced that for peace to be achieved and sustained, the full participation and potential of women must be unleashed.” View the session here. This event is in line with the call for action to accelerate full implementation of the Beijing Declaration and Platform for Action, as we head towards its 25th Anniversary in 2020. Read more here.

ANNUAL PRAYER FOR PEACE: In the lead up to the United Nations International Day for Peace (21 September) and the general debate during the 74th Session of the General Assembly, the Permanent Observer Mission of the Holy See to the United Nations hosted its 33rd Annual Prayer for Peace service. Archbishop Bernardito Auza led three prayers by Pope Francis, UN Secretary-General António Guterres spoke of the value of such a service, and His Excellency Tijjani Muhammad-Bande of Nigeria, President of the 74th session of the General Assembly, expressed how ”it is important to seek the help of God in the work of the United Nations.”

OR CLIMATE JUSTICE: On Friday, September 20, 2019, LOWC staff joined an estimated 60,000+ students, adults and activists in the Climate Strike for climate action in New York. Greta Thunberg delivered a speech during the event in New York stating, “we are doing this to wake leaders up… We are a wave of change, together and united we are unstoppable .” It is estimated that more than 1 million people participated in climate strikes globally across 125 countries on this day.

The UN Youth Climate Summit and SDG Action Zone took place the following day (September 21) at the United Nations Headquarters where Greta Thunberg criticized world leaders for their lack of urgency, during the opening session. Young entrepreneurs from around the world were given the opportunity to take the mic and discuss solutions.

On September 22, UN Secretary-General Antonio Guterres convened the Climate Action Summit 2019, where leaders were urged to showcase “concrete, realistic plans to enhance their nationally determined contributions by 2020, in line with reducing greenhouse gas emissions by 45% over the next decade, and to net zero emissions by 2050.” During the event (view here), members of governments, the private sector, civil society and other international organizations came together to develop six action portfolios to curb global greenhouse gas emissions and promote global action. 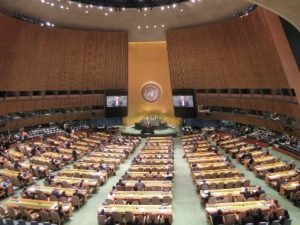 74TH GENERAL ASSEMBLY CONVENES: The 74th session of the United Nations General Assembly (UNGA74) began on 17 September with the general debate taking place 24 – 30 September under the new GA President, His Excellency Tijjani Muhammad-Bande of Nigeria. To view what each country had to say during the General Debate, click here. Many other high-level events were held, such as on Universal Health Coverage, the High-level Political Forum on Sustainable Development, financing for development, and the review of progress made in addressing priorities of small island developing states (SIDS) also took place during this time.