THIRD COMMITTEE OF THE GENERAL ASSEMBLY: During October, UN Special Procedure mandate-holders and other experts delivered reports to the General Assembly’s Third Committee (on Social, Humanitarian and Cultural Issues), as mandated by the Human Rights Council. These reports focused on the advancement of women, indigenous issues, the protection of children and the promotion and protection of human rights to name a few. The meetings were chaired by H.E. Mr. Christian Braun, Permanent Representative of Luxembourg and can be viewed online here.

Ms. Phumzile Mlambo-Ngcuka, Under-Secretary General and Executive Director, UN Women, gave opening remarks on the Third Committee’s session on Advancement of Women, highlighting that “violence against women and girls and the renewed pushback against women’s rights remain pervasive around the world so as we prepare for the 25th Anniversary of the Beijing Platform for Action in 2020, we need renewed commitment from all.” The Secretary-General focused two reports on Advancement of Women, titled “Improvement of the situation of women and girls in rural areas” and “violence against women migrant workers.” A report was also submitted by the Committee on the Elimination of All Forms of Discrimination Against Women (CEDAW).

The Special Rapporteur on the rights of indigenous peoples report focused on the implementation the right of indigenous peoples to self-determination through autonomy and self-government. The report includes eight recommendations, one including the role of States in adopting and implementing “all measures necessary to ensure the adequate recognition of the rights of indigenous peoples to their lands, territories and natural resources, as that recognition represents the cornerstone of their autonomy and self-government and is essential for their survival as distinct peoples.” Documentation of all reports for the Third Committee’s agenda items can be accessed online here. 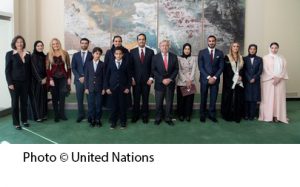 UNITED NATIONS DAY: On October 24, 2019, the United Nations celebrated United Nations Day, marking 74 years since the UN Charter came into force in 1945, launching the United Nations. The Charter consists of a preamble and 19 chapters, calling for the U.N. to “maintain international peace and security, promote social progress and better standards of life, strengthen international law and promote the expansion of human rights”. The United Nations Secretary-General António Guterres commented at its commemoration that “United Nations Day highlights the enduring ideals of the Charter, amid stormy global seas, the Charter remains our shared moral anchor.” Guterres has announced that 2020 will kick off with a UN75 initiative that will feature the world’s largest international dialogue on “the role of global cooperation in building the future we want ” to commemorate the 75thanniversary. A special UN Day Concert, featuring musicians from Qatar (pictured above with the Secretary-General) was also held and can be viewed online here.

MANDATE ON SEXUAL VIOLENCE IN CONFLICT: The ten-year anniversary of the Mandate on Sexual Violence in Conflict was commemorated at the United Nations ECOSOC Chamber on 30 October, 2019, hosted by the Republic of South Africa and the Office of the Special Representative of the Secretary-General on Sexual Violence in Conflict. The event began with imagery from the exhibition “Youth Speak Out Through the Arts” (pictured left), showcasing art from a diverse group of youth working in New York as well as two young artists working in Iraq.

Ms. Amina Mohammed, United Nations Deputy Secretary-General, stated that “sexual violence in conflict has been called history’s greatest silence, the least reported, the least condemned.” Mohammed reflected on the creation of the mandate as the UN’s commitment to “highlight, prevent and seek justice for these crimes” after it was established through the adoption of Security Council resolution 1888 in 2009.

from those who have experienced sexual violence in conflict. Ms. Nadia Murad and Dr. Denis Mukwege, 2018 Peace Prize Laureates, officially launched the “Global Fund for Survivors of Conflict-Related Sexual Violence” to help survivors and their families rebuild through locally designed solutions including reparations for survivors. Read the 2019 annual “Conflict Related Sexual Violence” report of the United Nations Secretary General here.